I remember parent’s weekends from when I was in school…..the dinner dance on Saturday night, the out to dinner with mom and dad, and the shopping trip with mom to the mall to get a little something (think 80’s style sweater-lovely!). We also took advantage of having our parents there for a trip to the grocery store for room snacks. I always lived in a dorm with just a small fridge in my room and of all of the 8 girls we lived with, not one of us had a car on campus in all 4 years! Unheard of these days (and actually by senior year it was unheard of in those days as well!)

We went to Casey’s Parents Weekend knowing he was going to be incredibly busy with his band commitments. They had a performance on Friday night at the Boston Pops Gala (fund raiser for scholarships – thank you donors!)  so from class ending til 11pm he was with the band. Saturday was the football game and he had band 7:30am-4:30pm, and Sunday he had a parade 11:30-2pm.  All that to say, we only saw him for dinner Saturday, and for a few minutes before the parade then lunch/ice cream Sunday afternoon before we left. 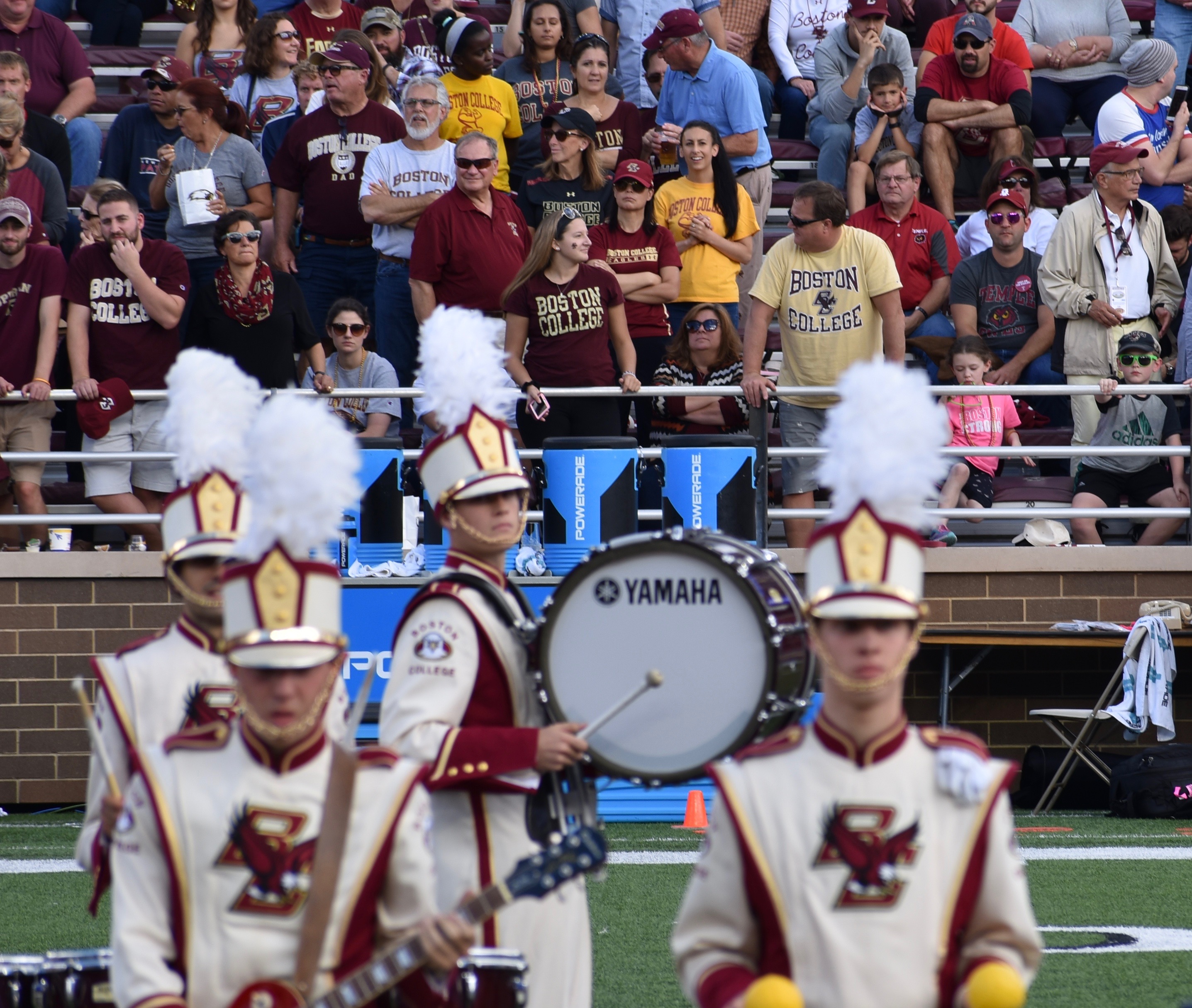 We saw more of Casey like this than up close and personal!

We have been beyond blessed to have met the Russells during orientation in July. I was sitting outside after the parent’s group one night, waiting for Steve and everyone had left except this one man sitting on the stone wall a few feet from me. I asked the standard “so do you have a son or a daughter coming to BC?’  He responded in a way that is oh so familiar to me ‘daughters…actually 3, I have triplets and they are all going here’. Coincidence? I think not! We were meant to meet as Paul and Kelley became our fast friends and we have already seen them a few times since then. They have been incredibly generous to us helping us out in getting tickets, parking and this past weekend we stayed with them at their house about an hour from BC. They are down to earth, easy to be around and Casey has become friendly with the girls as well. 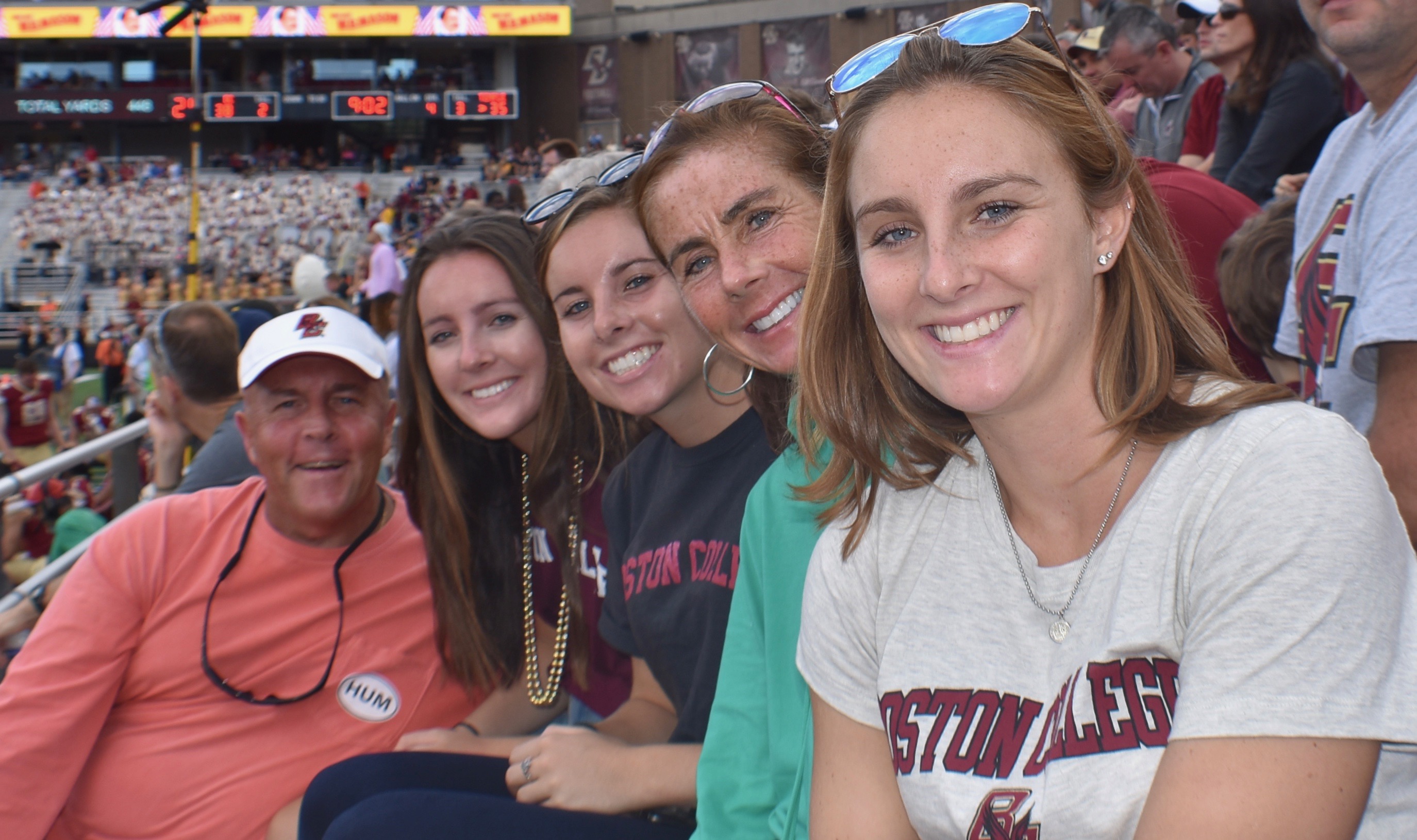 Steve’s parents were at their time share in Lenox ,Ma so his dad met us and came over to spend the day – Casey was so excited to see him there <3 Our friends, The Crotty’s joined us as well since BC was playing Temple, where their older daughter goes to school.  They sat there with their Temple shirts and did not get eaten alive ;)…Katie was smart though and bought a BC t-shirt to be safe!

It was a great game and especially nice since BC won – always a good thing with all those parents and families there for the weekend. 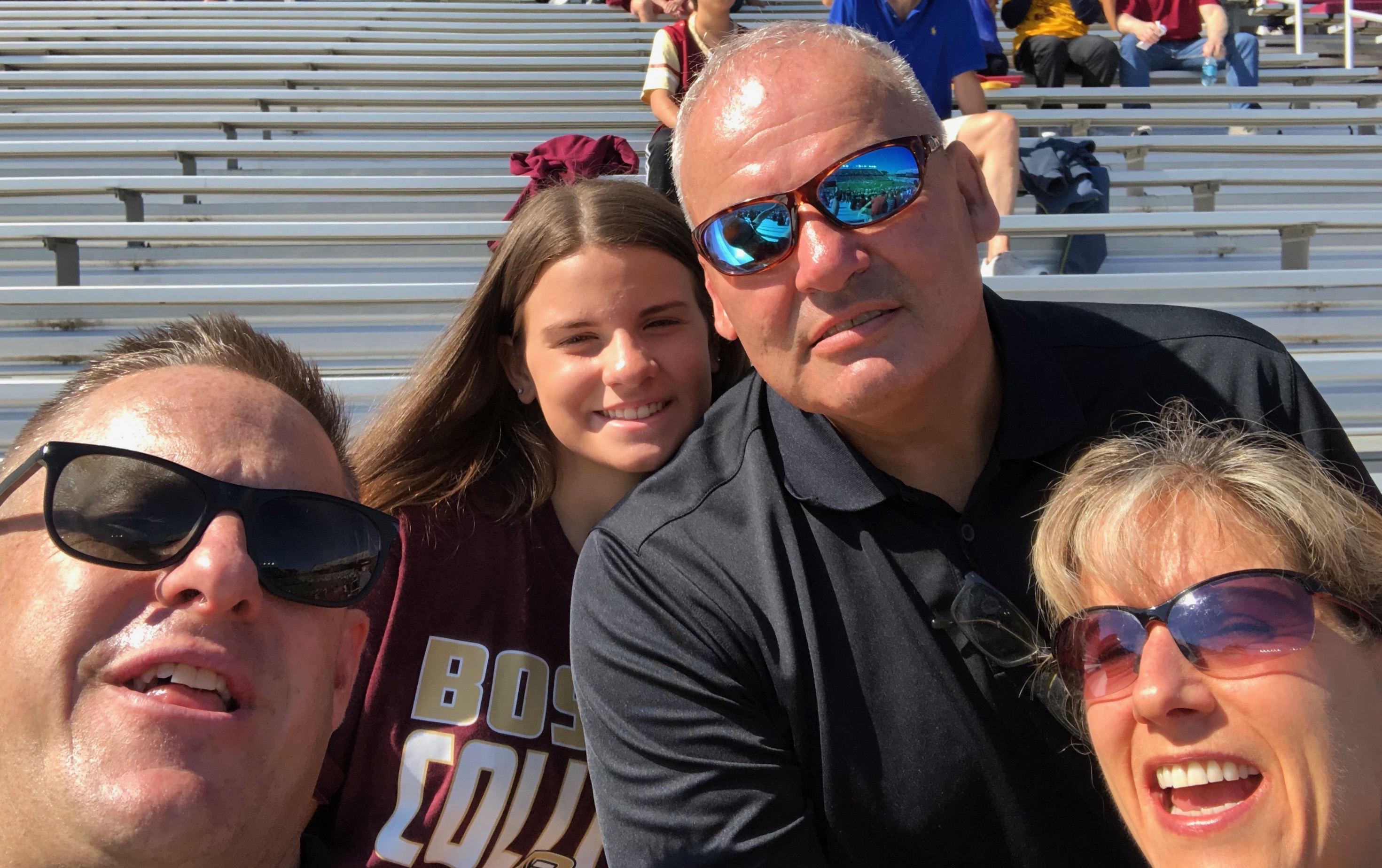 Our selfies need some improvement !

Casey ran over for a few minutes to our friends’ tailgate

Then headed out to eat…

Dinner at City Side Grille

We dropped Casey off – he was exhausted so was going to wish his friend a happy birthday and head to bed.

We drove out to the Russell’s house – in a beautiful beach town. My run Sunday morning was so peaceful… 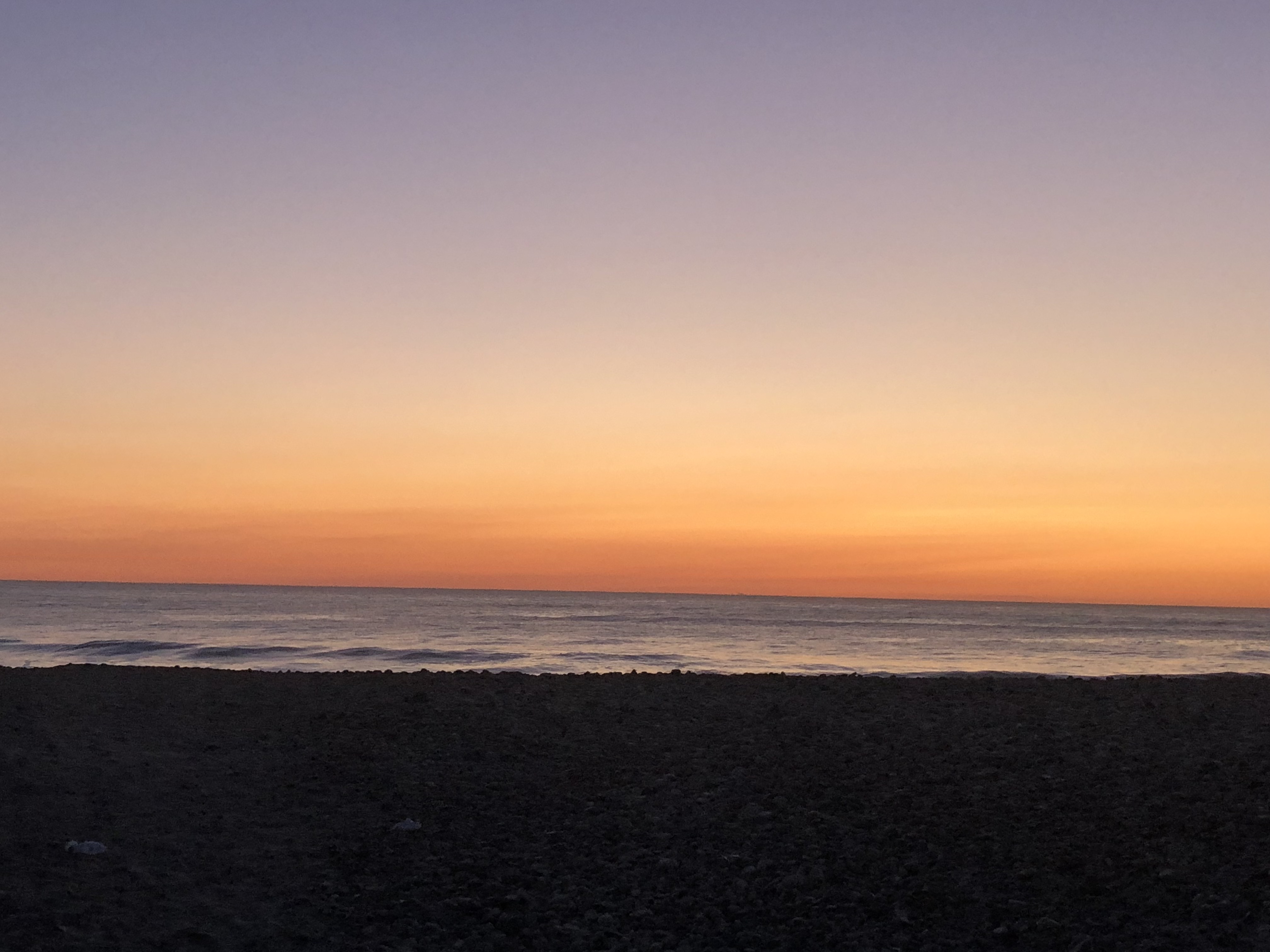 Not to shabby of a background to my morning run

We chatted with Paul and Kelley and finished up Casey’s laundry (very thankful they let us use their washer/dryer….oh my did his clothes need to be washed!!! ) Interestingly, there were very few pairs of underwear and socks for the length of time it had been since he last did laundry…anyone else with boys who can relate????

We were to pick Casey up for breakfast but lo and behold he was still sleeping….just going to wish his friend a happy birthday turned into a bit of a later night 😉  So Steve and I went to get breakfast and bring bagel sandwiches back to him. 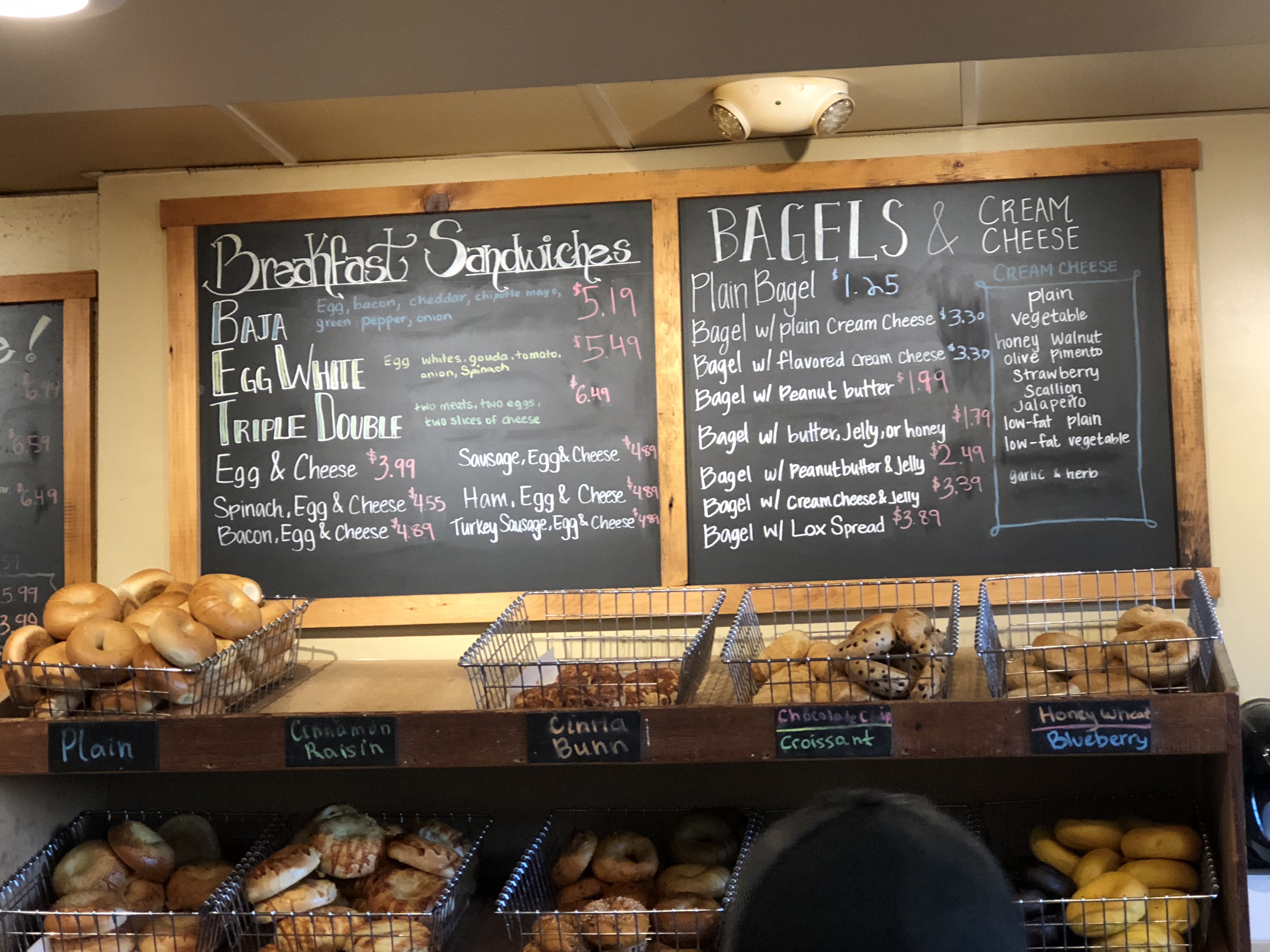 Amazing bagel shop where Steve had ‘the most incredible bagel sandwich of his life’…with ghost pepper cheese on a sirachi bagel…sweating during breakfast anyone??? 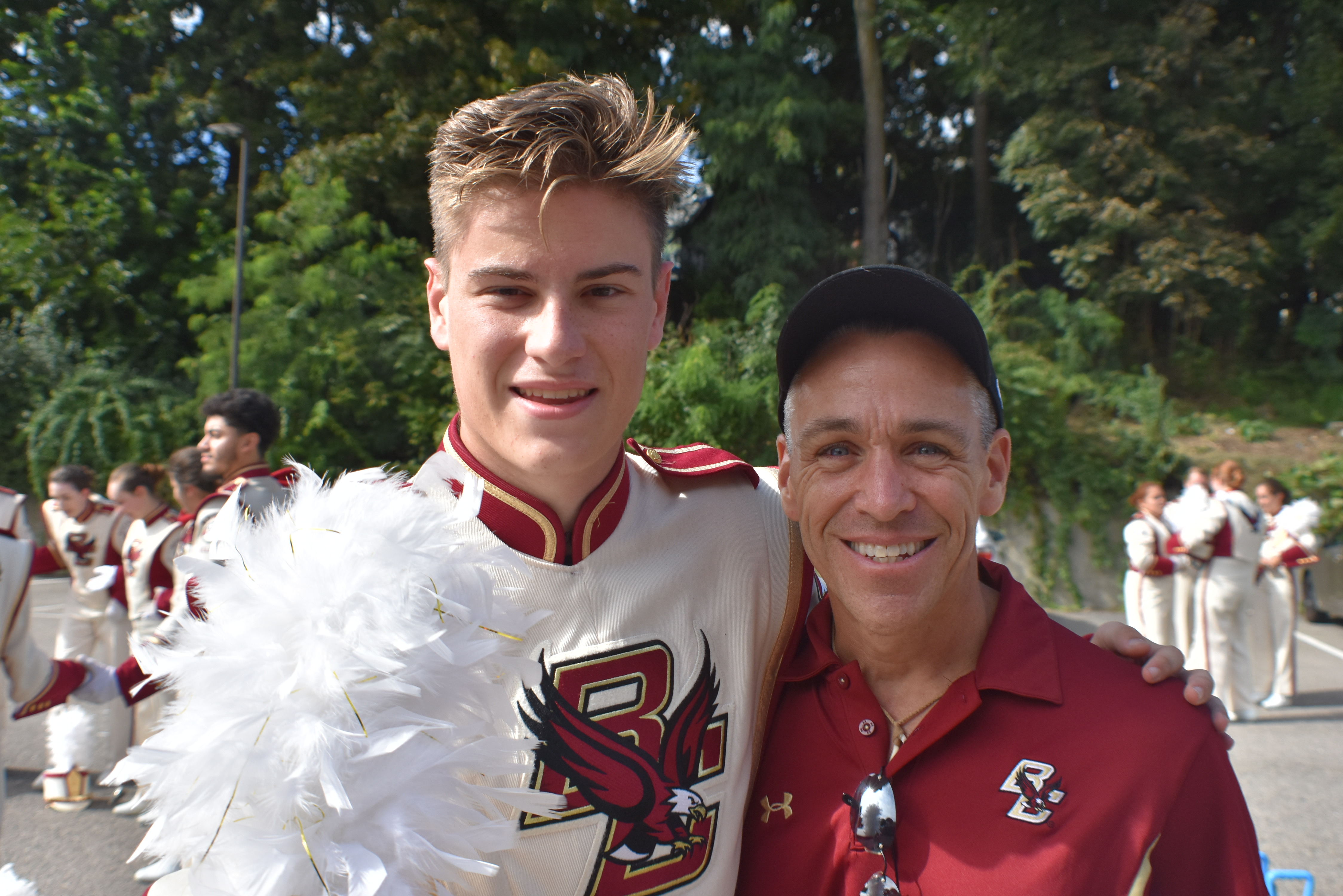 Casey with Dave, his band director

After the parade, we had planned to say goodbye and head out as we were stopping to see Steve’s parents on the way home and had a drive in front of us.  But Casey asked if we could get something to eat and we of course obliged! It is amazing how we spend all of this time with our kids for 18 years…then they leave and we suddenly cling to any time they will give us. That time at lunch ended up being our best connection over the weekend. We were happy to get home late if it was going to give us time with our ‘baby’.  It is funny too that a few months ago, I would be encouraging him to eat veggies and fruit etc but when we see him it is ‘order whatever you want’ with no concern of health, price or any restrictions at all.  It is fun to spoil them  – maybe similar to how a grandparent feels.  So while we still say ‘ try to get some rest’ ‘take care of yourself’, it is SO much different than it was a mere 3 months ago. I do not know when he goes to bed, where he is, who he is with, what he is eating, how often he is showering or washing his sheets (he actually says he does not sleep under the covers so he does not have to wash his sheets…but that begs the question – ‘do you wash your comforter???’) or if he has all of his work done.  This is in some ways a relief and in other ways an anxiety producer. But either way, it is an important step in both our journey and theirs. 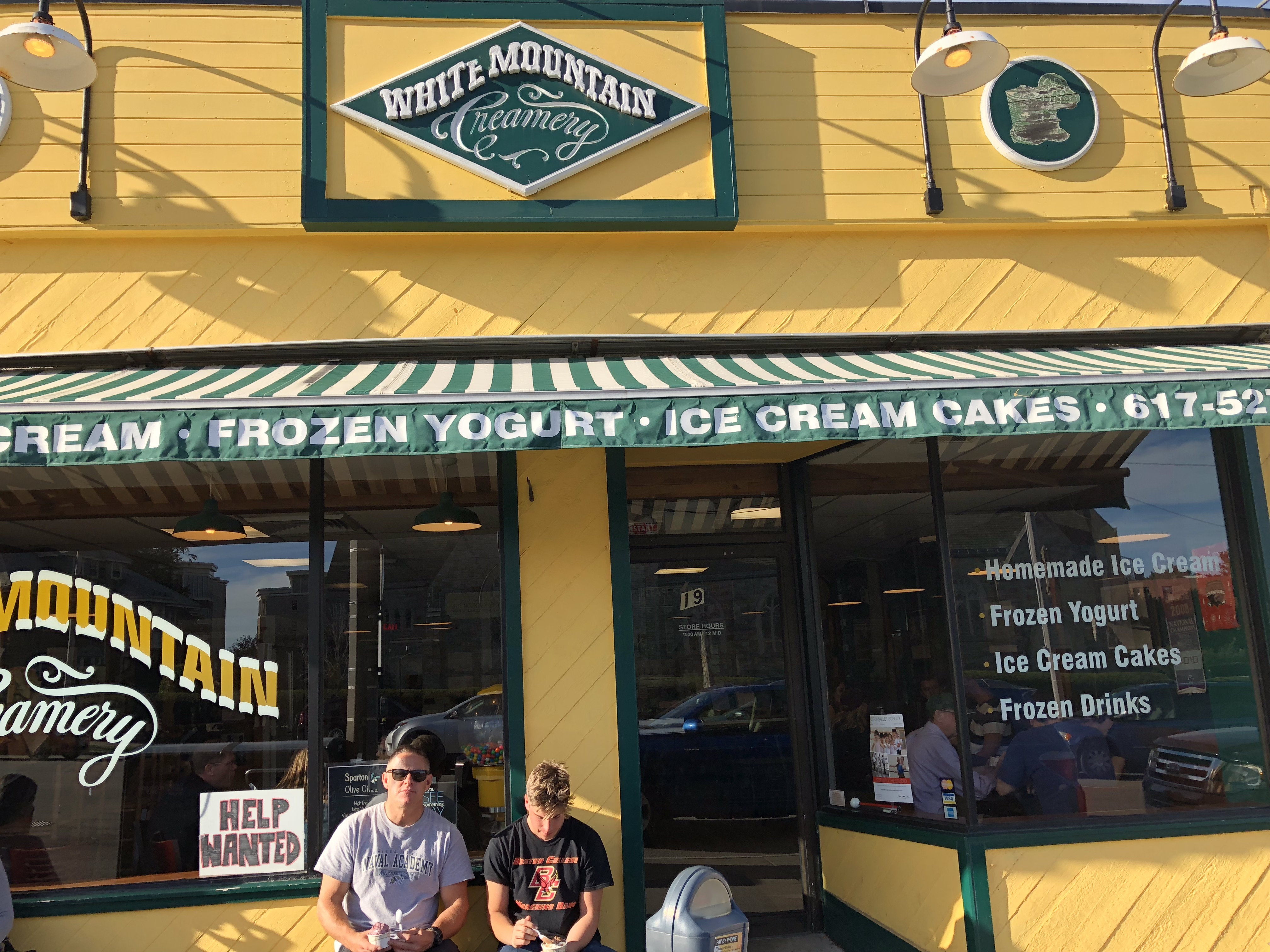 A visit to BC is not complete without a stop here for ice cream – yum!

While we did not see Casey too much, we were grateful to have some time with him .  And it was not hard to leave since he will be home on Friday for the long weekend 🙂

I cannot post today without a little shout out ‘Happy Anniversary’ to my one and only…such an amazing life partner…it has been an incredible journey so far and I am excited to see what the next chapter brings. Of course we are starting it out just right – celebrating our 24th with soup and salad at home and early bed – we are exhausted from being away and not up for any special food after eating out all weekend.  Boy we know how to live it up don’t we?! For our 25th we will have to up our game 🙂

Just a typical day in the life 😉